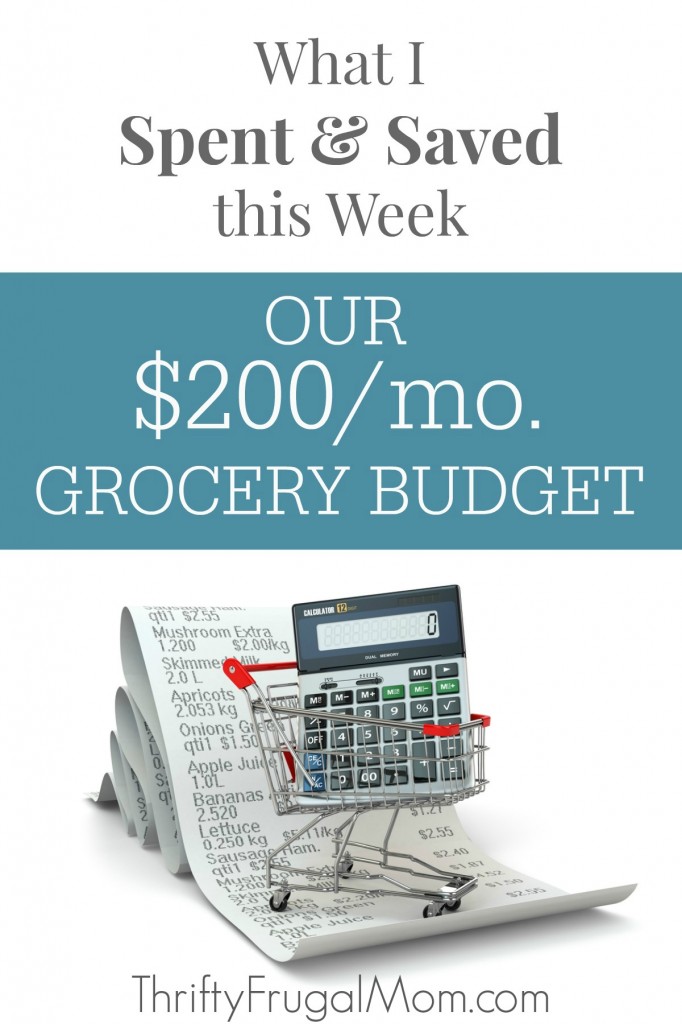 Some of you have wondered where I get my printable coupons. Here are the main coupon sites that I use: Coupons.com, Smart Source, Red Plum, Ibotta and Fetch Rewards (use code GEOEG at sign-up for $2.00 in points!).  Manufacturer websites and Facebook pages are also great sources.

If you are new here and unfamiliar with my weekly What I Spent & Saved posts, it probably is helpful to understand a bit about how I shop.  I do something called stockpile shopping.  This simply means that when I see an item at rock bottom prices that I regularly use or know that I can use, I’ll buy several of it.  This might seem kind of crazy, but it honestly saves me hundreds of dollars a year!  Simply put, by buying 6 bags of frozen veggies when I can get them for $0.50/bag with a coupon and sale instead of paying the full price of $1.50, I save $6.00.  This savings adds up pretty quickly!  Want to know more about this kind of shopping?  Up until recently, I blogged at Parents.com and one of my readers wrote a great post for me there about 5 Tips to Spend Less but Get More.

I also buy meats and veggies in bulk.  The meat I either can or freeze and then obviously have it on hand whenever I need it.  I buy large quantities of fruits and veggies when they are in season and I can get them at really great prices.  By canning or freezing them, I save a lot and we are able to enjoy great produce for less cost all year long.  I do still buy some fresh fruits and veggies too.  In fact, every 7 to 10 days I go to our local farmer’s market and get several heads of lettuce so that we can enjoy salads at least 4 times a week.

I almost didn’t do any shopping this week!  I looked at the Giant deals and there were none that I really felt were worth my time.  And at first I didn’t plan to go to CVS either.  But then I saw that I could get a good deal on diapers and since I had $10 Extra Bucks to use there, I figured I might as well go ahead and stop by.  I also ended up going to Aldi too.  I probably could have waited until this week, but I was driving right by and I didn’t have any of the children with me and since I was out of a couple of things, I decided to stop.  Yes, I definitely enjoy grocery shopping!  🙂

Yay for more cheap diapers this week!  After coupons and sales, I paid just $4.43 a pack for these.  I didn’t need them that badly, but part of the way I save on diapers is to stock up like this when I can get them cheap.  Paying just $4.43 a pack sure beats $8.99 or more a pack!  I saw online that some people were getting $4/$20 diaper purchase coupons from CVS via email.  I was hoping I’d get that lucky, but it didn’t happen.  CVS used to send me lots of coupons like that and it definitely helped save a lot more!  But the last 2 years they just decided they didn’t like me or something, because I never get them anymore.  Maybe I should boycott them!  🙂  I really don’t think they’d notice though.  Ha!  Plus, I’d miss out on good deals too, so I guess it wouldn’t be worth it. 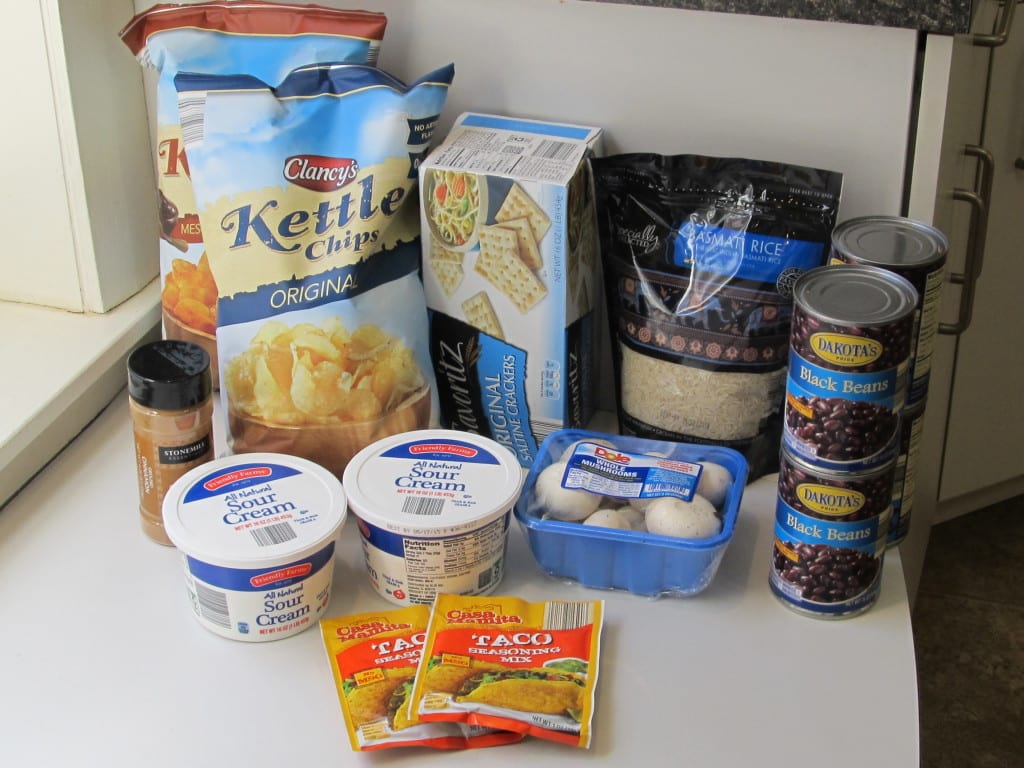 My Aldi trips are usually to stock up on some of the basics that I need and then I typically look over their produce section to see what things are on special and often end up grabbing some of those as well.  This week the only extra thing that I got was mushrooms.  They were on sale for $0.69 and then just today I realized that I had a $0.25 Snap rebate that I could use on them as well!  It’s not much, but I was happy to discover it.

I don’t know what kind of rice you use, but my sister-in-law introduced me to Basmati rice a couple of years ago and I love it!  I’ve had a hard time using anything else since.  I like that it isn’t enriched (which means that it has stuff added to it) and it just cooks up so nice and fluffy and has a wonderful taste.  I usually get it at a local bulk food store, but I haven’t been by there recently and was almost out.  So when I saw that Aldi now carries it, I decided to go ahead and get it there.  I’m pretty sure it’s a tad more expensive, but sometimes that is just how it is.  It’s definitely not worth the extra time and gas to run to the bulk food store just for that!

Update: I actually was making a casserole with rice for dinner and happened to have a bag of the Basmati rice from the bulk food store still.  So I looked and it is actually $0.25/lb. more there than at Aldi!  I guess I saved money after all!  🙂  And the Aldi rice even comes in a resealable bag that makes it super nice for storing, which is an added bonus. 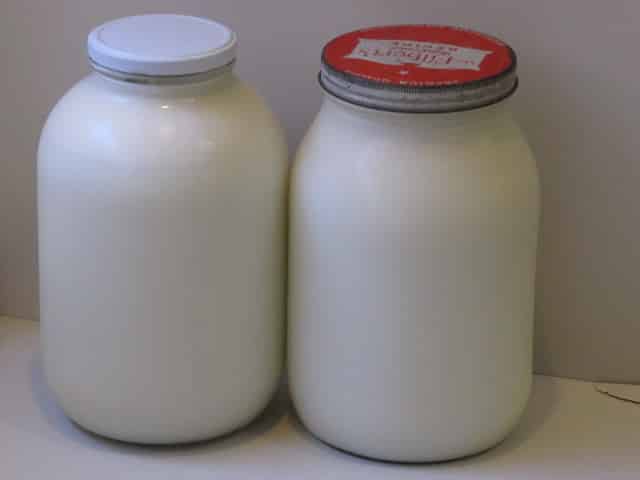 Plus 1 more gallon of milk and a 5 lb. block of Farmer’s cheese.

We usually get milk for a $2.00/gallon from a local farm.  But last weekend we were at my in-laws and they were going to get milk from the farm where they buy it and so, since we were needing milk anyway, my husband thought he’d save time and just hop a ride with my dad-in-law and get milk for us too.  Well, he didn’t realize that the farm they got to had just upped the price of milk to $3.50/gallon!  Ouch!  It’s still a bit cheaper than what we’d pay for milk at the store here, but quite a bit more than we would have paid had we bought it from our usual farm.  It is organic though, so I guess that helps.  🙂

I also got a 5 lb. block of Farmer’s cheese too.  A local Amish store had it on sale for $2.10/lb. and my mom-in-law offered to pick some up for me when she was there.  I typically try not to pay more than $2.00/lb. for cheese, but this was so close and since it’s gotten harder and harder to find cheese at that price, I went ahead anyway.

One thing that we’ve done to save money on our grocery bill over the years is to limit the amount of cheese that we eat.  Maybe that sounds kind of crazy to you, I don’t know.  And it’s not that we don’t like cheese, because we all actually love it!  It’s just that cheese can quickly get to be expensive.  So in many recipes, I’ll reduce the amount of cheese that is called for and most of the time, we don’t miss it.  Once in a while though, I’ll bomb it.  🙂  Although, after a while you kind of figure out how much you need to still make it good and cheesy without being super cheesy if that makes sense.  We also don’t eat cheese by itself an awful lot, although we do that more than we used to.  Honestly, when we were first married we almost never at cheese plain.  We simply didn’t have room in our budget to do it!  But over the 8 ½ years that we’ve been married, we’ve gradually started eating it more and more.  Part of it is because our budget isn’t quite as tight as it had been when we were first married and well, part of it is because we probably have just gotten a little used to having it and now think we can’t do without it totally.  🙂

Disclosure: This post contains affiliate links. Thank you for helping to keep the lights on here at the Thrifty Frugal Mom!