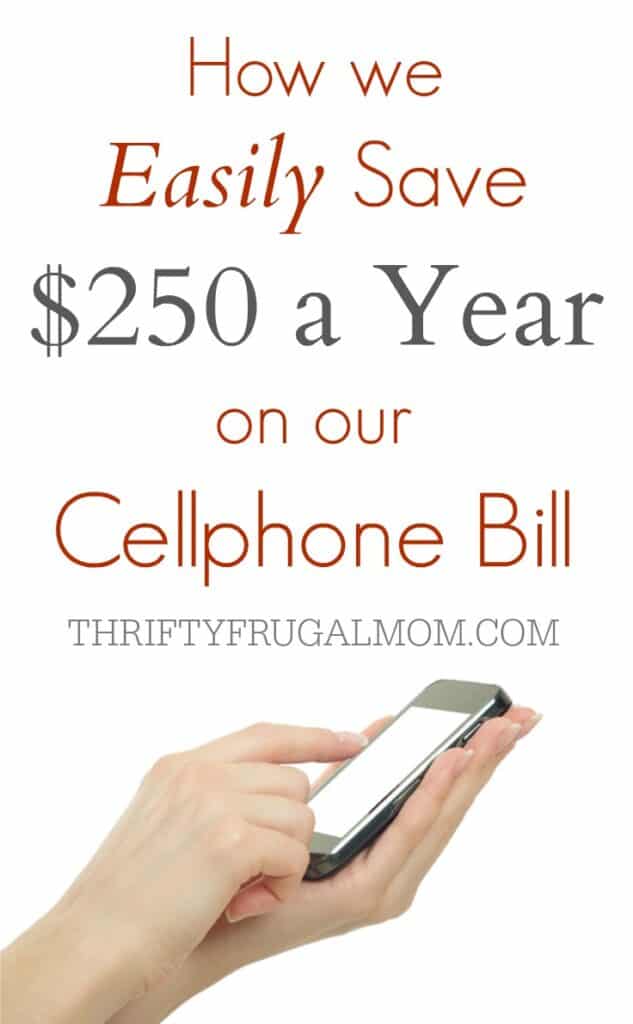 You all know how I love saving money.  So it’s no surprise that when first learned about the budget cellphone company Ting, a couple of years ago, I immediately knew that it was the perfect solution for us to save money on our cell phone bill.

I mean who wouldn’t like to pay less money for two cell phones than they were paying for one plus have a better phone too?

Why I Love Saving on Our Cellphones with Ting

1.  A lot less expensive!
We pay less for two phones with Ting than what we had been paying for one phone on a very inexpensive, basic plan with AT&T.  Most months we pay just under $30 total for both of our phones and that includes taxes and regulatory fees.

2. We could afford a phone for my husband.
Because of the low cost, we finally felt like we could justify getting my husband a cell phone.  He had never had one but due to some new circumstances, it was feeling like a definite need!

4. We only pay for the minutes/texts/data we use.
I can’t tell you how much I love this!  It’s just so, so simple.

What You Should Know About Ting’s Cheap Phone Plans

1.  COVERAGE
Ting is hosted by the Sprint Network which simply means that they use Sprint’s towers.  If you have decent Sprint coverage in your area, then I think you’ll be happy with Ting.

2.  RATES
Ting implements a pay-for-what-you-use method of billing. They have levels of voice minutes, texts and data that come in different sizes (XS, S, M, L, XL, and XL+).  At the end of the month you pay for however much you used in each category plus a $6 per device fee.

This means you have control over how much you pay.  If you are getting close to using all your minutes one month, have plenty of texts left and don’t want to hit the next level, just use your texts instead!

Here’s a chart that shows you the various levels and how the billing system works: 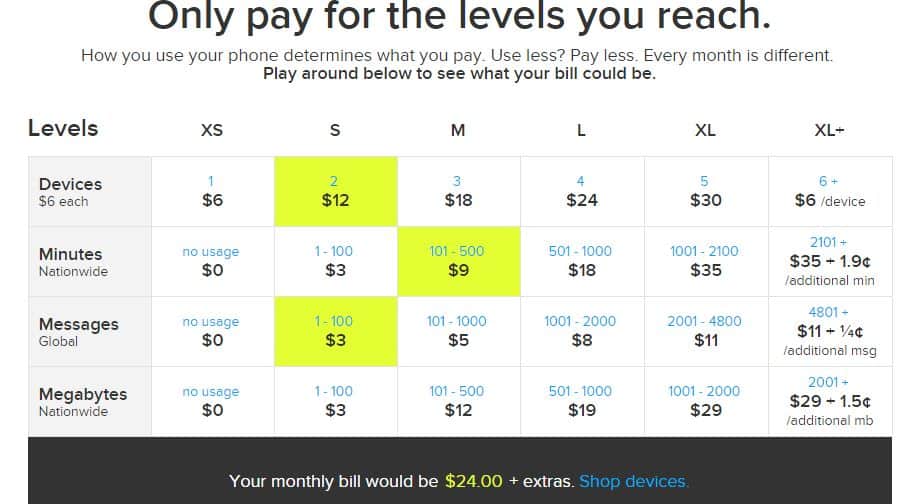 3.  CUSTOMER SERVICE
I’ve been super impressed with Ting’s customer service.  I was pretty confused when I was trying to bring my phone over to Ting and when I contacted customer service they were prompt and super helpful.

I’ve had to contact them several times since and have always had prompt thorough help.  In fact, get this: when you call them you will actually get to talk to a real, live person instead of a computerized system!  How awesome is that?

Oh, and one month I used 1 megabyte of data (and actually this was accidental).  I didn’t even contact Ting to explain what had happened, but on their own, Ting was awesome enough not to even charge me for it!

Also, when my husband joined Ting several months after me, he joined partway through the billing cycle.  So instead of charging him the full $6 device fee for the month, they only charged him $4.80 which reflected the amount of days that he was actually with Ting.  That’s what I call looking out for your customer! 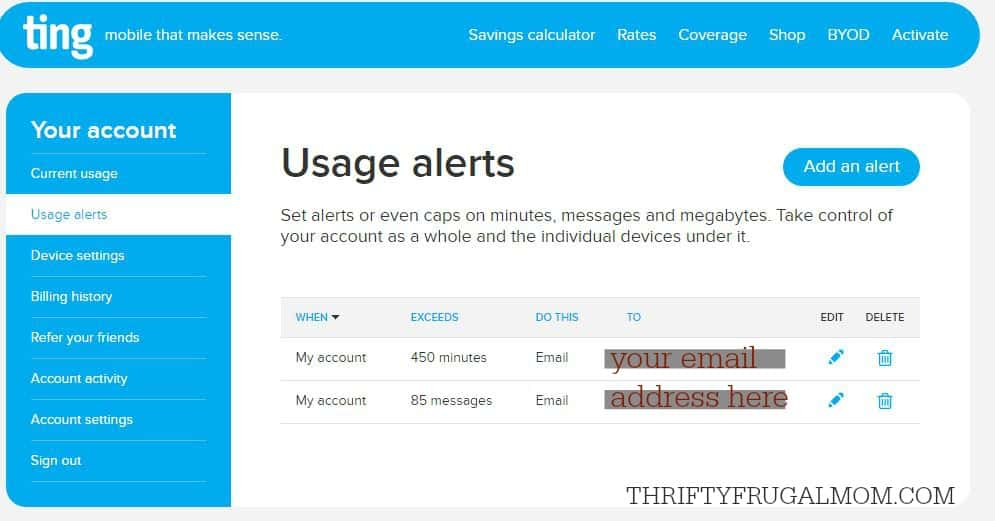 * ALERTS
You can set up an alert to let you know via email or text when you hit a certain limit of usage.  This is a great way to keep yourself from spending more than you want to spend! 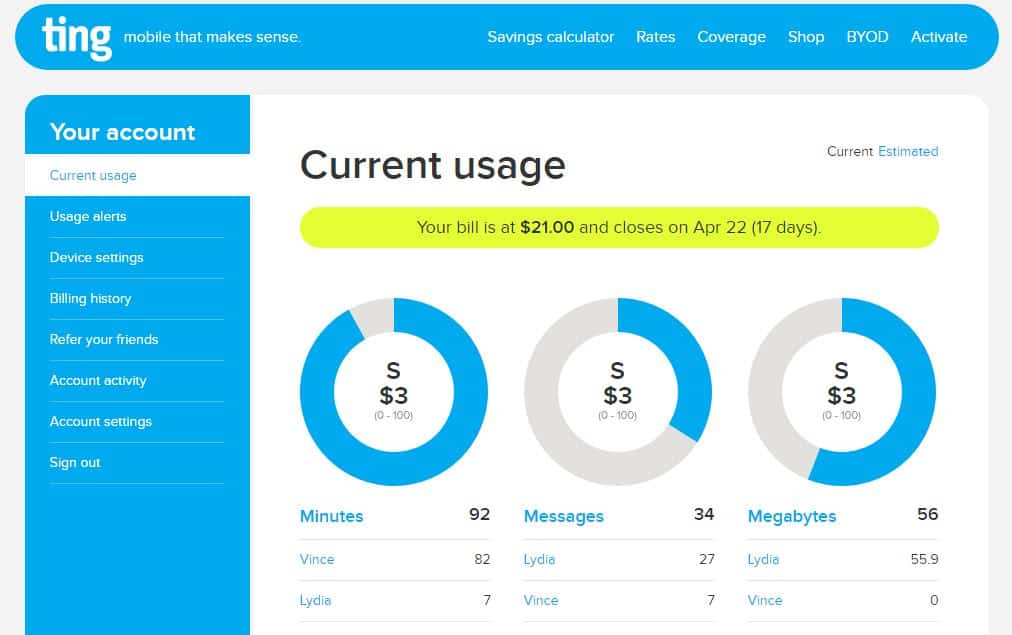 You can also just log into your Ting account online at any time and see your usage- it appears as an easy to read chart like you see above.

* DEVICES
Ting allows you to use almost any Sprint device on their network.

While you can purchase your phone through Ting, when I was looking for our phones I found that it was cheaper to buy them through Ebay.

We went with a very basic flip-phone that cost us about $40 for my husband.  And for myself, we got a used HTC EVO 4G smartphone for less than $100.  It’s been simple to use and I’ve been extremely happy with it!

Click here to get a $25 credit with Ting that you can use for either your device or towards your service cost!