This Decadent Frosted Chocolate Chip Cheesecake is one of the best cheesecakes ever! And you can’t beat that fluffy chocolate frosting!

I love desserts of all kinds, but if I had to pick a favorite, I’m pretty sure that it would be cheesecake.

There’s just something about that little bit of tart flavor mixed with the sweet that gets me every.single.time.  I’m such a fan, that I even got my husband, who used to think he didn’t like cheesecake that much, converted into a cheesecake lover!

The downside of that is that I now have to share my cheesecake.  🙂  But it also means that I make it more often than I used to because he gets hungry for it, so that’s definitely a major plus! 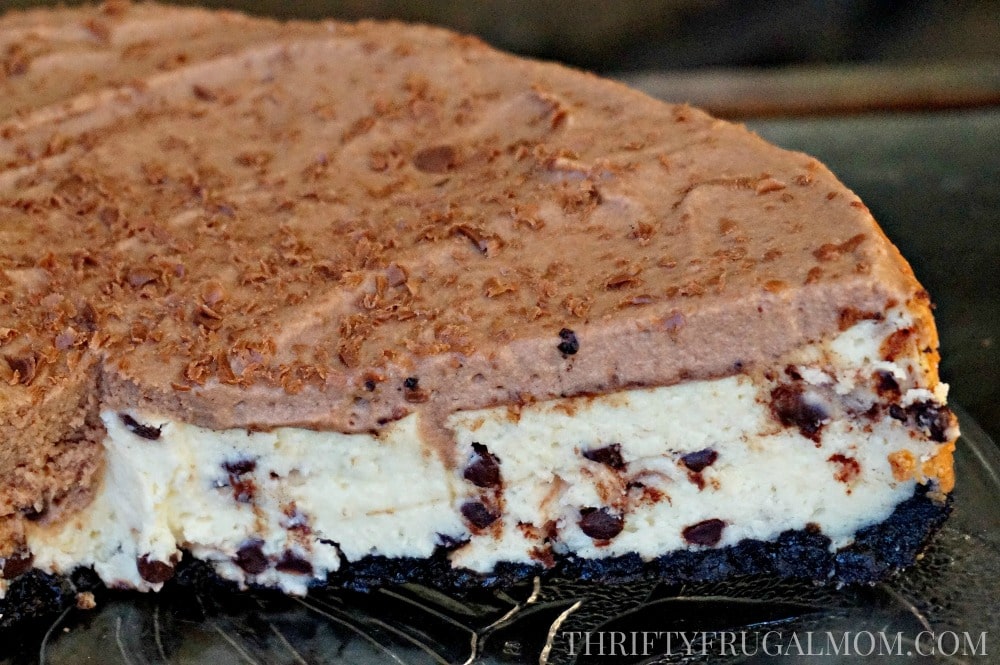 I don’t know about you, but making cheesecake used to intimidate me.  I’d heard all those things about it being sort of touchy, how it cracks easily and how hard it is to get the cheesecake mixture the correct consistency.  And so for a long time, I didn’t even try making my own and would instead just enjoy a slice every one in a while when we ate out.

But then I came across this Decadent Frosted Chocolate Chip Cheesecake recipe and knew that I had to give a try because we love chocolate chip anything.  Plus it was a frosted cheesecake.  So hey, if it cracked, I had nothing to worry about because I could just cover the cracks up with that creamy chocolate frosting! 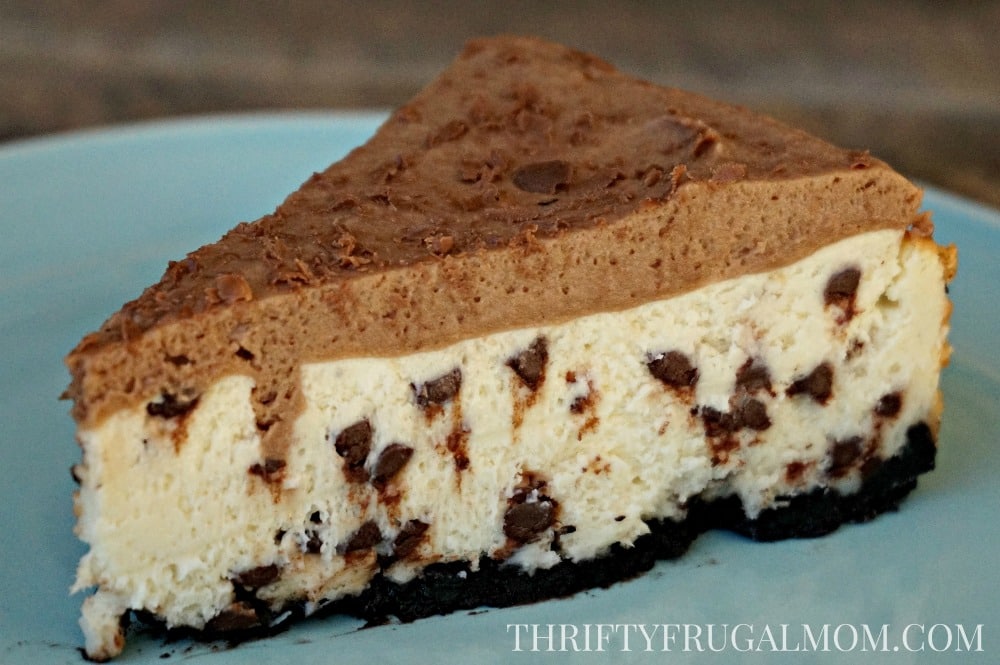 The thing is, I soon discovered that making your own cheesecake really isn’t that difficult.  Basically, you want to be sure to not over bake it- it’s actually done when the center of the cheesecake still looks a little jiggly.

The other thing that you need to remember is to not over mix the batter.  You want to blend the ingredients just until they are mixed in, but no longer than absolutely necessary.

And I’ve also found that my filling is much more smooth if I have my refrigerated ingredients like eggs and cream cheese at room temperature when I make the cheesecake. 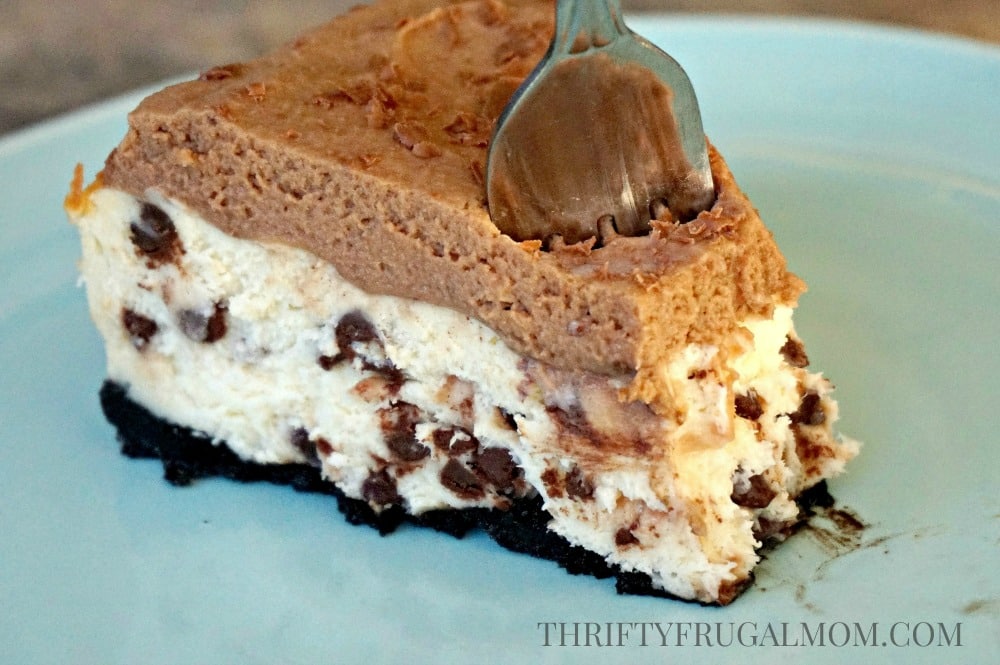 The creamy chocolate frosting is a fun addition to this cheesecake.  And while I’m sure it would be good without the frosting, it really does give it that extra wow factor- in both taste and looks! 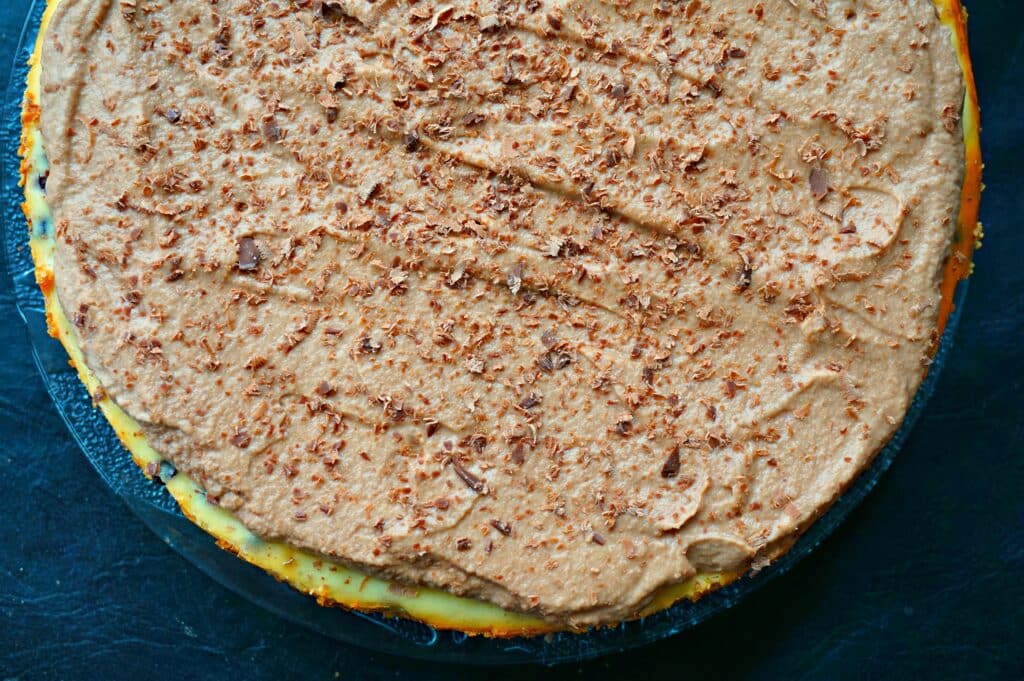 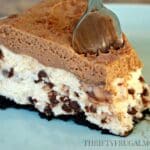 One of the best cheesecakes ever! It's so delicious and the Oreo cookie crust and light fluffy icing really take it to the next level.
Prep Time40 mins
Cook Time1 hr
Total Time1 hr 40 mins
Servings: 12 slices
Author: Lydia @ ThriftyFrugalMom.com
Prevent your screen from going dark

Recipe adapted from this Taste of Home recipe.

PIN NOW TO SAVE FOR LATER: 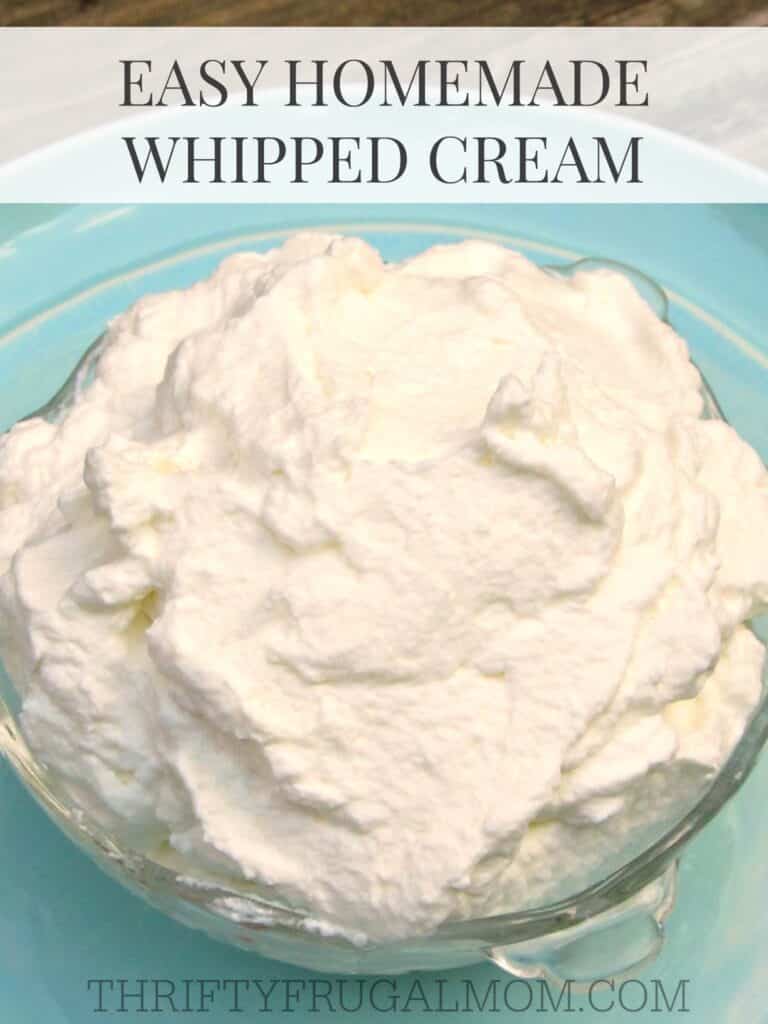