Want to get out of debt? Here’s how we paid off our $90,000 mortgage in just 5 years! Lots of awesome tips and inspiration for paying off your mortgage to be able to live debt-free!

There are affiliate links in this post. If you use these links, I may earn a commission- please read my full disclosure policy.

While I frequently share about saving money, I don’t often mention many details about our personal financial story.

There have been different times that I’ve considered sharing more, but in the end, I’ve always decided not to because I was afraid that it would sound like I was tooting our horn or that we think we have it all together and are so much better than everyone else.

I also have worried that it will make other people feel “less than” because if you are like me, it’s easy to do the whole comparison thing and start being hard on yourself because you aren’t doing what someone else does.

And that is so not what I want this blog to be.  I want it to be a place of encouragement and inspiration!

Recently though, I had a reader email me with some questions about saving money and she mentioned that although she is super frugal, sometimes she just needs encouragement to keep saving, to stick with budgeting, to be reminded often that all the sacrifices and hard work will be worth it in the end.

And I realized that by basically avoiding sharing our personal financial story, I’m really doing you all a disservice.

Because one of the things that was huge in keeping me motivated to save and pay off our mortgage was to hear other people’s stories about how they made it through tight times.

So, I finally decided that it was time to share more of our personal financial journey with you.  I sincerely hope that it can inspire and encourage you in your own financial journey, even though it may look very different than ours!

One of the craziest things that we’ve done was to buy a home only 6 mo. after we were married.  That might not sound that crazy initially, but the thing was, the house cost us $90,000 and we borrowed the full amount!

Plus, it was a fixer-upper, so we knew we would be putting more money into it over the next several years as we remodeled too!  Definitely not something I’d probably recommend, but after getting lots of counsel from others, we felt like it was the right choice for us.

And thanks to the grace of God and a lot of hard work, we were able to pay off our mortgage in full just 5 years later, meaning that by age 31 we were debt-free homeowners!

I’m not going to lie to you and say that our life suddenly changed and we were so much happier once we were debt-free, because that simply wasn’t the case.  Life was still life.

However, there was a huge sense of freedom that came from knowing that we didn’t owe anyone anything.

And it was rewarding to be able to loosen up our spending just a tad, feel like we could regularly give more generously and know that we could pursue some other dreams like more schooling for my husband.

What were some of the things we did that helped us pay off our $90,000 mortgage in 5 years, plus do lots of remodeling work as well?

Obviously, there were a lot of things that factored in, but here are the 10 things that I could think of right off the top of my head.

1.  Bought a Row House in the City

We lived in an area where land was super expensive, so this was a much cheaper option and we were able to get a nice house with a small yard for way less than we would have otherwise.

It was sometimes been a bit challenging to live in that location with 3 young children, but it was definitely doable!

My husband is a Mr. Fix-it of sorts, so this worked for us because it meant we were able to do a lot of the work ourselves.  We also had times where family and friends pitched in with smaller projects like painting and roof replacements.

I’ll be honest though. I don’t enjoy that kind of work much at all so it felt like a huge, overwhelming job to me.

It also took up most of my husband’s free time for the first couple years of our marriage, which of course had it’s downsides and often felt like a big sacrifice.  We ultimately did it though because we knew the long-term benefits would be significant.

During those first 5 years of our marriage, we took very few vacations and did very little traveling.  Sometimes that was really hard because it felt like our friends were always doing fun things that we simply couldn’t afford to do.  We had to remind ourselves often of the end goal!

One of our favorite way to find lodging when traveling is by using Airbnb- you can even save $40 off your first Airbnb stay!

4.  Only Sort of Did College

We both got associate degrees at the small college where we met and fell in love.  Soon after graduation, we got married and because I planned to be a mostly stay-at-home mom once we had children, and since we were hoping to start having children before too long, I didn’t see any reason to get more education at this point.

I had been working as a certified pharmacy tech for 7 years, so I continued with that job until our son was born 20 months later.

My husband wanted to do more schooling though but wasn’t exactly sure what degree he wanted to pursue.  Instead of going to college without any plan, we felt it was smarter to wait until he had a clear sense of direction as to what field of study he should do.

So we chose to postpone the whole college thing for a couple of years, after which he got his Master’s and now is working on his Ph.D.

We were both blessed with jobs that always had plenty of work.  I worked 3 days a week up until our son was born and often put in extra hours since there were almost always some available.

My husband had a good-paying job in construction where he also frequently put in additional hours so that we could pay extra on our mortgage.

We also did a variety of random things to earn more money that we would then put towards the principal on our mortgage.  At one point we even got paid to clean our church every week!  Definitely not our favorite job ever. But hey, it helped!

Related: 10 Easily Doable Side Hustles that Will Make You Extra Money

Soon after our first child was born and I switched to being a stay-at-home mom, I discovered the art of couponing and deal shopping.

Along with using paper coupons, I also started using apps like Ibotta and Fetch Rewards (my favorite because it’s so easy to use- get 2,000 free points when you use referral code GE0EG at sign up!) to save even more money on groceries, including fruits and veggies!

It takes a bit of time to do, but I always felt like it is one way that I could relatively easily “earn” us some money, while still being at home.

By using coupons and shopping sales, I was able to save at least an extra $200 or more on groceries each month.  Obviously, that freed up a nice amount of money that we could then use to do remodel work or pay off our mortgage faster. 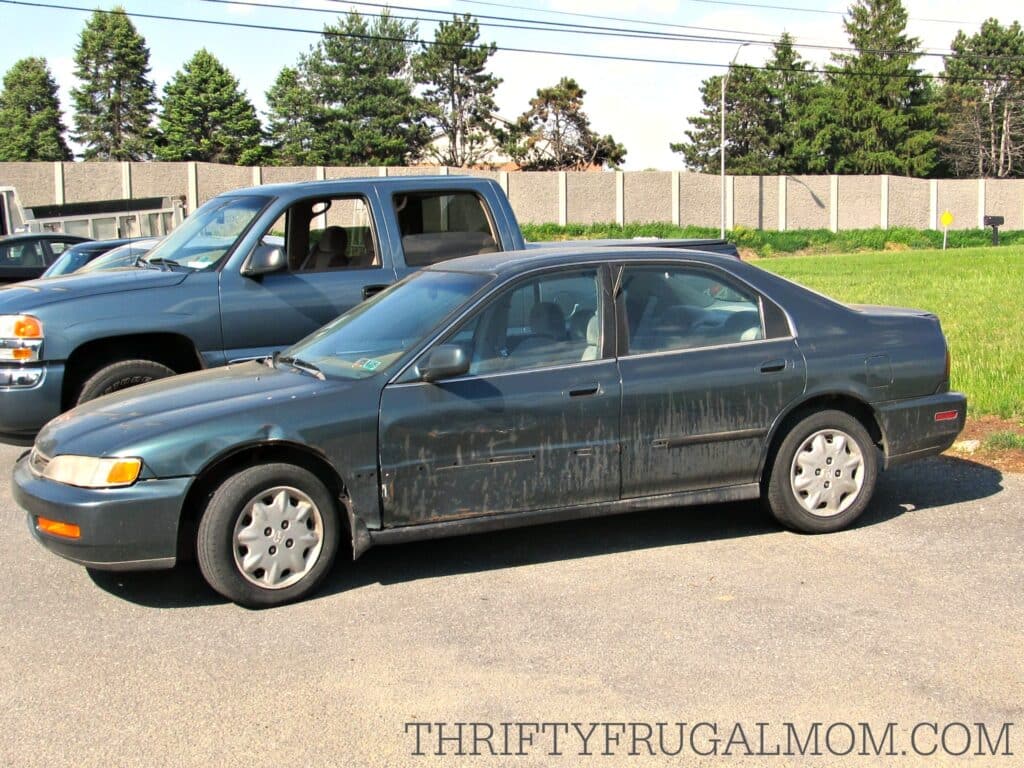 We’ve never owned a car that was newer than 9 years old.  Most of them haven’t looked awful (although the one you see pictured above sure did!), but neither do they look amazing either.  Actually, my husband jokes that their not-so-nice appearance is a great way to guarantee that they won’t be stolen!

Even though we buy older, used vehicles, we’ve tried to be selective with what we buy and we go for cars that have had one or two owners, come from a reputable dealer, etc.

I know that still doesn’t always mean you won’t get a lemon, but so far we’ve been blessed with good vehicles and have saved a bundle in the process!

8.  Had Just One Cell Phone

This was one of the things that we did that a lot of people simply didn’t get.  And during that time, we had plenty of comments and hints that we were kind of backward for only having one cell phone.  But the thing is, we didn’t really need a second phone.

If I needed to get in touch with my husband during the day, I could easily call him at his job.  Other than that, if he was away I was either with him or we just dealt with the inconvenience of him not having a way to be contacted.

Was it a pain at times?  Yes.  But honestly, it wasn’t a huge deal because we were used to it.

Once my husband started working on his Masters and began to commute to school regularly, for a variety of reasons, we finally decided it was kind of important that he had a phone.  Thankfully, we found an inexpensive phone plan that only cost about $30 amonth for 2 cell phones, which felt very affordable!

Looking for cheap cellphone plans? Two that I recommend are Ting Mobile (my link gets you a $25 credit!) and Tello Mobile (includes free international calling to 60 countries).

9.  Put Everything Extra Toward Our Mortgage

I’ve already alluded to this, but almost everything extra that we earned- raises, bonuses or simply side hustle income- went towards paying more on our mortgage.

Also, periodically throughout the year, we’d evaluate our budget. If there was a category where we weren’t spending as much as we had expected to, we would take that extra and add it to our mortgage payment as well.

I’ve already mentioned several specific ways that we did this, but really, doing without and living simply was a way of life for us.

During the years that we were focusing on paying off our mortgage, we bought only things that were absolute necessities.

My husband is super creative. And sometimes when I thought we needed something, he would figure out a way that we could easily make do instead.

We also bought a lot of things second hand and we rarely turned away anything free.

When we did need to purchase something new, especially if it was more than $20, we would try to wait for it to go on sale.

And if we ended up buying it online, we made sure to use Rakuten, a cashback website, so we would earn money on our purchase!  (Sign up for Rakuten here and get $10!)

If there was something that we only needed for a short time or for one project, we would see if we could find someone to borrow it from instead of buying it ourselves.

In short, creativity and contentment were our best friends when it came to paying off our $90,000 mortgage in just 5 years. Although I confess, unfortunately sometimes I really stank at the contentment part!

Related: 9 Things We Gave Up to Get Out of Debt Fast