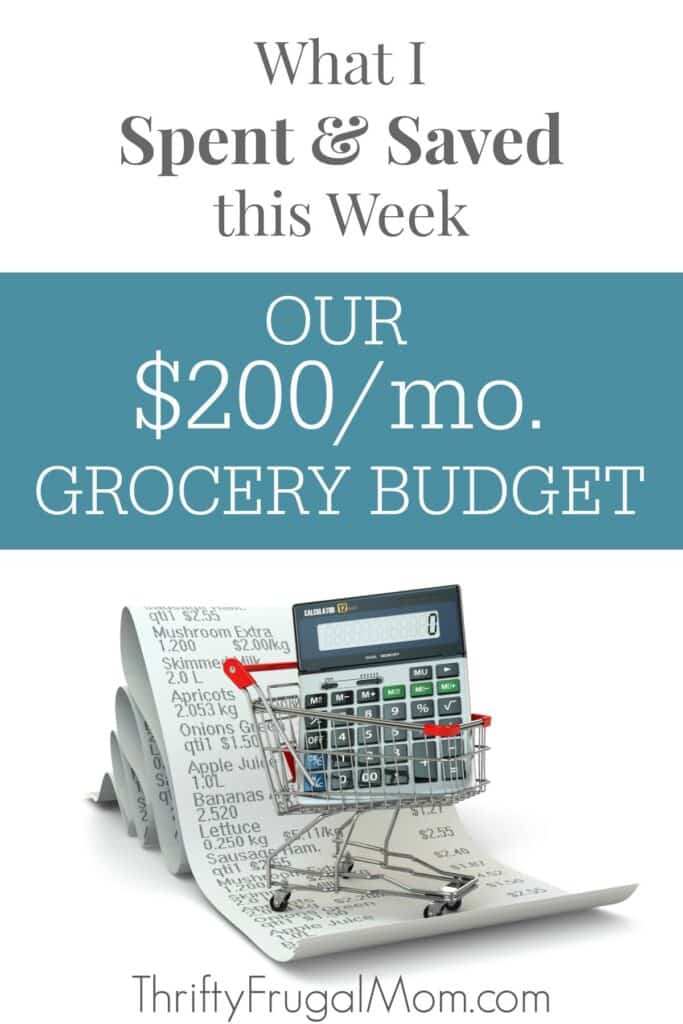 Some of you have wondered where I get my printable coupons. Here are the main coupon sites that I use: Coupons.com,  Smart Source, Ibotta, and Fetch Rewards (use code GEOEG at sign-up for $2.00 in points!).  Manufacturer websites and Facebook pages are also great sources.

If you are new here and unfamiliar with my weekly What I Spent & Saved posts, it probably is helpful to understand a bit about how I shop.  I do something called stockpile shopping.  This simply means that when I see an item at rock bottom prices that I regularly use or know that I can use, I’ll buy several of it.  This might seem kind of crazy, but it honestly saves me hundreds of dollars a year!  Simply put, by buying 6 bags of frozen veggies when I can get them for $0.50/bag with a coupon and sale instead of paying the full price of $1.50, I save $6.00.  This savings adds up pretty quickly! Want to know more about this kind of shopping?  Check out my post on How to Start Building a Grocery Stockpile.

I also buy meats and veggies in bulk.  The meat I either can or freeze and then obviously have it on hand whenever I need it.  I purchase large quantities of fruits and veggies when they are in season and I can get them at really great prices.  By canning or freezing them, I save a lot and we are able to enjoy great produce for less cost all year long.  I do still buy some fresh fruits and veggies too.  In fact, every 7 to 10 days I go to our local farmer’s market and get several heads of lettuce so that we can enjoy salads at least 4 times a week.

I was sick a good part of this week with a nasty cold that brought with it fever, chills, runny nose and terrible head pressure.  In fact, I’m still not feeling quite like myself and just today when I thought I was kind of getting over it, I started with a bit of a cough too!  Not fun, but it’s life.  And every time I’m sick like this, it makes me for the gift of good health that I and my family typically enjoy.  Too often I take my health for granted!

Because of not feeling the greatest and also because the deals were pretty sparse, I decided to just skip deal shopping this week.  I did still end up needing to grab a few things as you’ll see below, but really my shopping was almost non-existent.  And thanks to some credits, I actually had a negative balance this week! 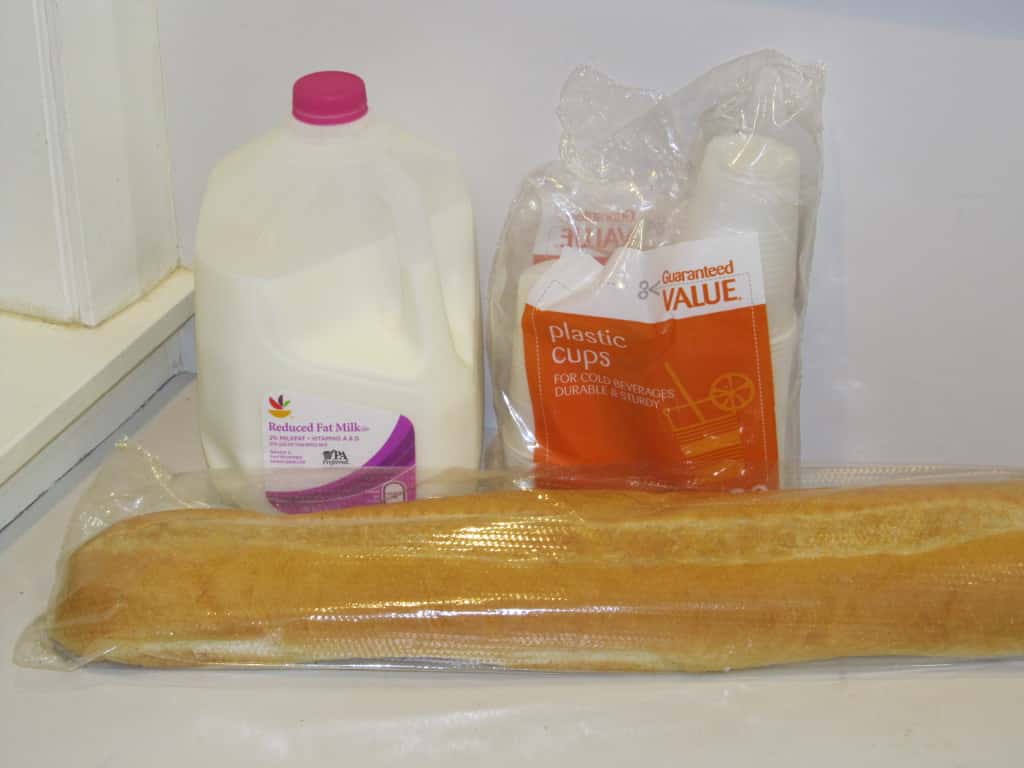 I took a snack to our son’s class at school because it was his teacher’s birthday.  Right before I walked out the door, I realized that I had no disposable cups!  Thankfully, we have a Giant just a couple of blocks away, so I swung by there and grabbed a pack.

The bread is something I don’t typically buy, but you know how I said I was sick most of the week?  Well, making meals felt like such a chore and you have no idea how often I wanted to order take-out!  One evening I was making Shakshuka and it’s kind of meant to be eaten with crusty bread.  So I thought I’d make something that my husband’s family calls Romanian bread, which is a lot like my Classic French Bread, but a tad faster to make because you don’t let it rise as long.  It’s kind of a long story, but basically, I apparently made the silly mistake of making the water too hot and as result, the yeast didn’t work and the bread didn’t rise.  By this point, I was feeling exhausted and wanted nothing more than to curl up on the couch under a blanket.  So I called my husband and asked him to stop by Giant and get any sort of crusty bread that he could find.  He kindly obliged and we were able to enjoy our dinner, in spite of my mistake.  Although I was reminded again that most of the time, bought bread just is nowhere nearly as good as homemade!  But I’m grateful for it, nonetheless, because it definitely is awfully handy sometimes.

Oh and if you ever make the mistake of using water that’s too hot when you make bread and it won’t rise as a result, don’t throw out the dough.  I did a Google search and decided to try to salvage it.  Basically, you just need to mix a bit more yeast with some warm water until the yeast is dissolved.  Then add it to the dough, along with enough flour to get it a nice consistency.  It worked fine, although the bread wasn’t quite the usual texture.  Still good enough though to eat, that’s for sure!

We typically try to buy our milk from a local dairy, but the only way we can do it is if my husband works since it’s located about 20 min. away, but is on the route he takes to and from his job.  He didn’t work this week though, so we ended up needing to buy some at the store. 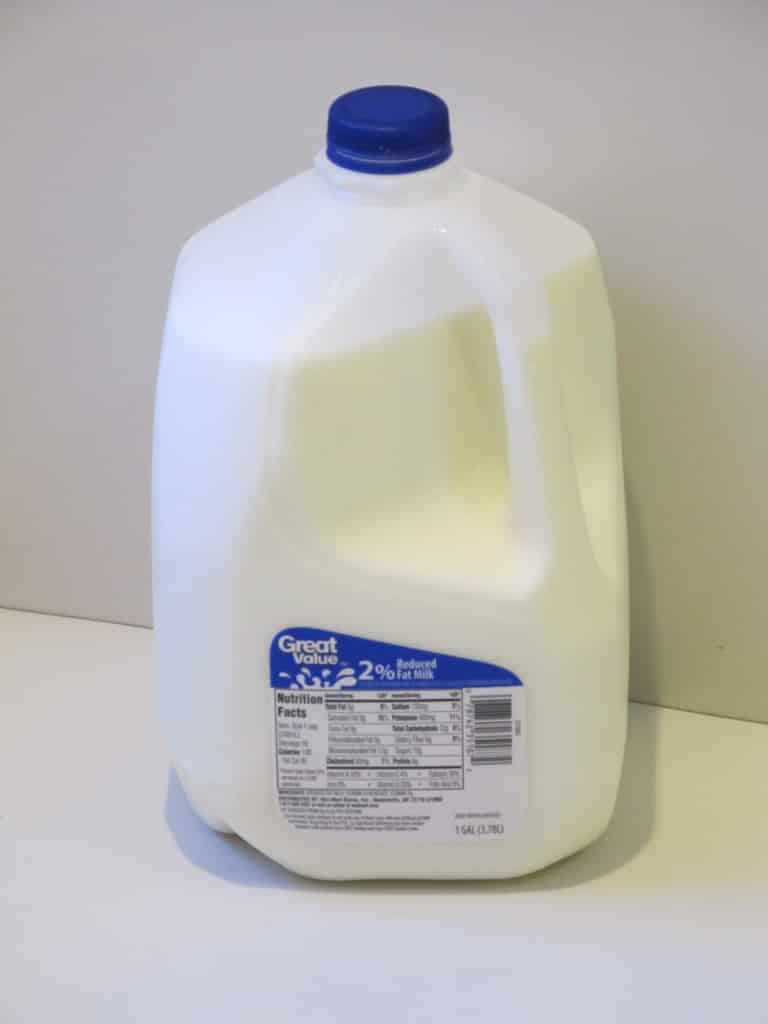 We were running low on milk, so we ended up buying another gallon to hold us over until this week when my husband could get more from the local dairy we typically buy milk from.

Credits: $65.06
* $10.45
I cashed out my Ibotta earnings!  I always just roll the earnings back into my grocery budget, since I figure that’s the best way to handle it since the earnings were because of grocery purchases.

* $54.61
The last couple of weeks I’ve been buying various items that are part of the Giant gas deals.  Basically, you get points for purchasing the products and then you can redeem those points for gas.  I was able to get $54.61 worth of gas for free as a result.  And since I only buy the grocery items that are part of these deals because they either get me free gas or make me money, I put the savings back into my grocery budget.  (To see the details of these purchases, look at my previous Giant purchases under my What I Spent & What I Saved posts.)