Homemade Apple Butter in just a little over an hour? Yes please! Thanks to the Instant Pot, apple butter has never been easier!

Last week my sister-in-law came over with her two boys and while our kids played, we worked at turning two bushels of apples into homemade applesauce.  It was kind of a lot of work, but we’ve both done it quite often, so it actually went really well.

In fact, once we got our workflow figured out, we worked together like a well-oiled machine and it ended up not taking us as long as we thought it would!

But we didn’t use all the apples for applesauce!  I decided to save a few to make into another one of our favorite apple things.  Apple butter! 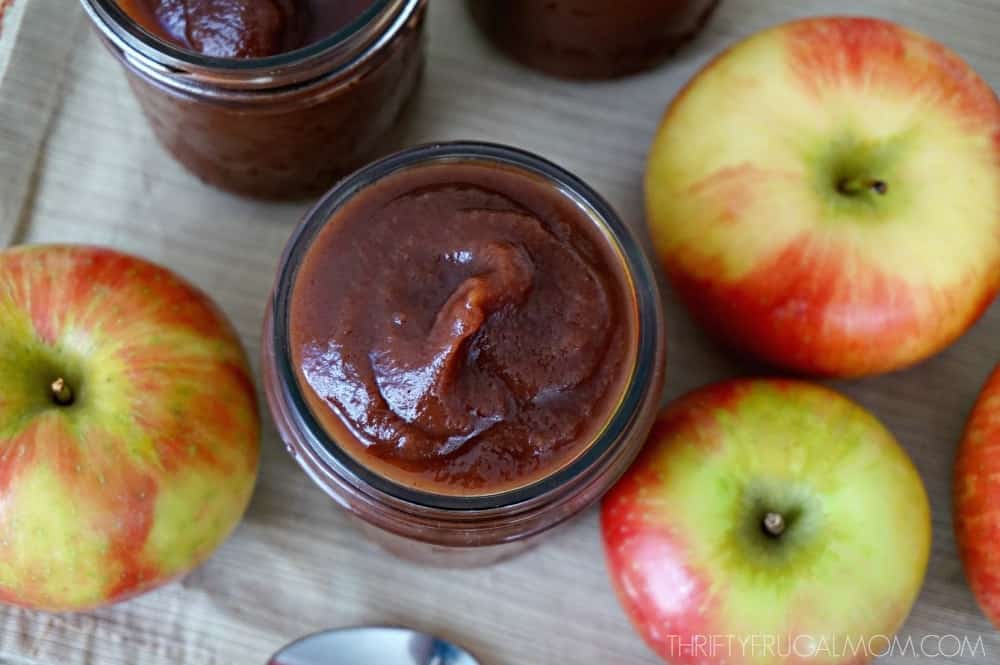 And you all, I’m so excited to share this apple butter recipe with you!  Because not only is it incredibly delicious (as in you’ll want to eat it straight off the spoon) it is also ridiculously easy to make.

Plus, it’s also much cheaper than if you go and buy it at the store, too!

In the past, I made this recipe in the slow cooker.  But this year I decided to try my Instant Pot because I knew it would be faster and I was into getting it done quickly.

It worked like a charm!  Just as good, but less time overall.

However, just in case you prefer using the slow cooker, I’m including directions for that method too.   Because I know we all have different preferences and I want to make making homemade apple butter as easy as possible for you!

What is apple butter?

I’m guessing that some of you are wondering, “What in the world apple butter is anyway? ”  And I understand.  It’s not something that I really was very familiar with until I got married.

My husband spent part of his growing up years living on the orchard where his dad worked.  As a result, he knows all about anything related to apples- including apple butter!

Basically, apple butter is a spread that is used as a jelly or jam.  It’s delicious on toast or biscuits, in peanut butter and jelly sandwiches, on pancakes and waffles, stirred into oatmeal or yogurt and it can be used in all sorts of recipes too, like these Apple Butter Snickerdoodles.  It also makes a great gift too!

It’s kind of like applesauce, except that you simmer the apples until they are cooked down more, making it thicker and allowing the sugars in the apples to caramelize.

This caramelization gives the apple butter a delightfully intense flavor and it’s also what gives it the rich dark brown color. 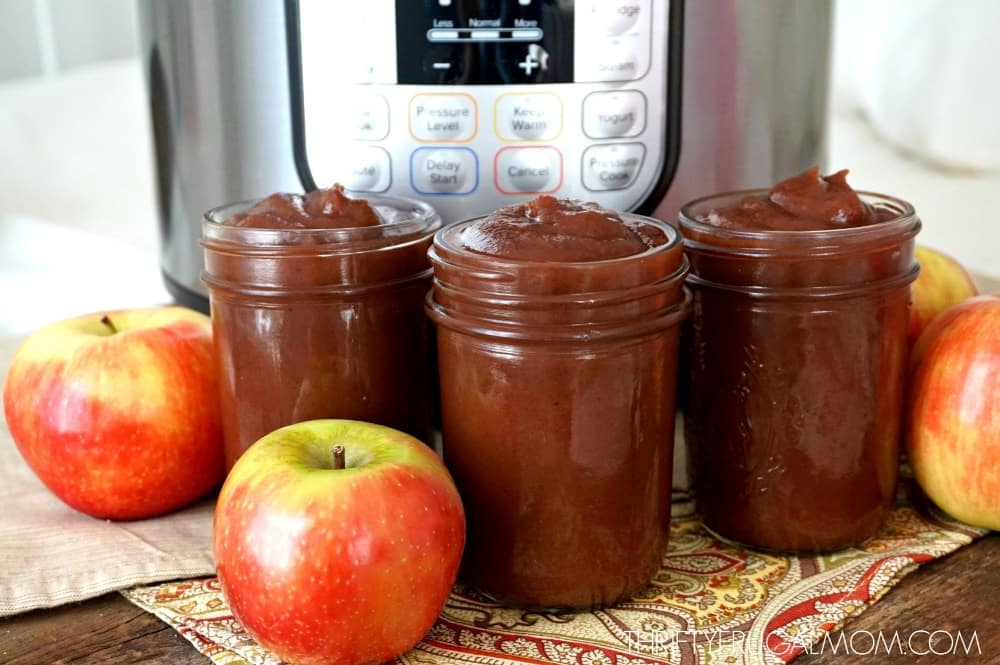 How do you make apple butter?

This is the part I love.  It’s so crazy simple!

All you do is peel, core and cut up your apples, then add them along with some spices, brown sugar, vanilla and water to your Instant Pot (or slow cooker) and let it cook away until the apples are soft.  Finally, you puree it with an immersion blender (this is the one I have) or regular blender until it’s nice and smooth.

And just like that you are done and have lots of delicious homemade apple butter ready to be devoured!

Really, you can use pretty much any apple, but in my opinion, you’ll get the best flavor by using a slightly tart variety.

My favorite apple for homemade apple butter and applesauce is Cortland.  But I’ve also used Fuji, McIntosh and even Gala, although I don’t think the apple butter made with Gala was quite as tasty as the other varieties.  It was still good though!

Other varieties that people like to use are Golden Delicious, Granny Smith, Braeburn and Jonagold. You can totally experiment by combining different apples to suit your taste!

Can you freeze apple butter?

Yes, I actually freeze apple butter every year when I make it.  While I love canning things (as is evidenced by all my canning tutorials), sometimes it’s just easier to freeze them instead.  And since I have plenty of freezer space, that’s what I do.

I often freeze the apple butter in jelly jars, but these plastic containers work well too! 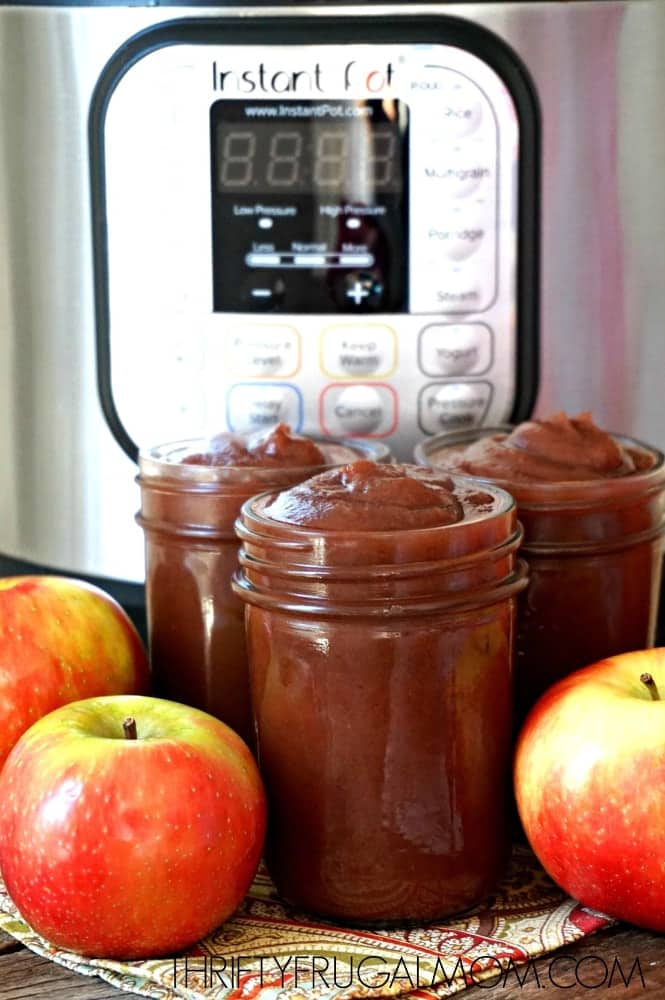 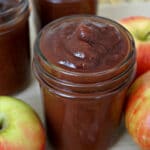 SLOW COOKER INSTRUCTIONS:
Add peeled, cored, sliced apples to slow cooker. Cook on low for 6 to 8 hours, stirring every couple of hours.
Blend apples with immersion blender or blender. Add all remaining ingredients except for the water. (You only need the water for the Instant Pot recipe.)
Cook on low for an additional 5 to 6 hours, stirring occasionally. CANNING INSTRUCTIONS:
If you'd like to can your apple butter, it's super easy to do!
Process jars of apple butter in a water bath canner for 5 minutes for half-pints and pints and 10 minutes for quarts.