Some of you have wondered where I get my printable coupons. Here are the main coupon sites that I use: Coupons.com, Smart Source, Red Plum and Ibotta.  Manufacturer websites and Facebook pages are another great source.

If you are new here and unfamiliar with my weekly What I Spent & Saved posts, it probably is helpful to understand a bit about how I shop.  I do something called stockpile shopping.  This simply means that when I see an item at rock bottom prices that I regularly use or know that I can use, I’ll buy several of it.  This might seem kind of crazy, but it honestly saves me hundreds of dollars a year!  Simply put, by buying 6 bags of frozen veggies when I can get them for $0.50/bag with a coupon and sale instead of paying the full price of $1.50, I save $6.00.  This savings adds up pretty quickly!  Want to know more about this kind of shopping?

I also buy meats and veggies in bulk.  The meat I either can or freeze and then obviously have it on hand whenever I need it.  I buy large quantities of fruits and veggies when they are in season and I can get them at really great prices.  By canning or freezing them, I save a lot and we are able to enjoy great produce for less cost all year long.  I do still buy some fresh fruits and veggies too.  In fact, every 7 to 10 days I go to our local farmer’s market and get several heads of lettuce so that we can enjoy salads at least 4 times a week.

I hope that helps you make sense of some of this.  I realize at first glance it can really look like we eat rather strangely!  Of course, if you have any questions feel free to ask them in the comments!  I’ll be more than happy to try to answer them. 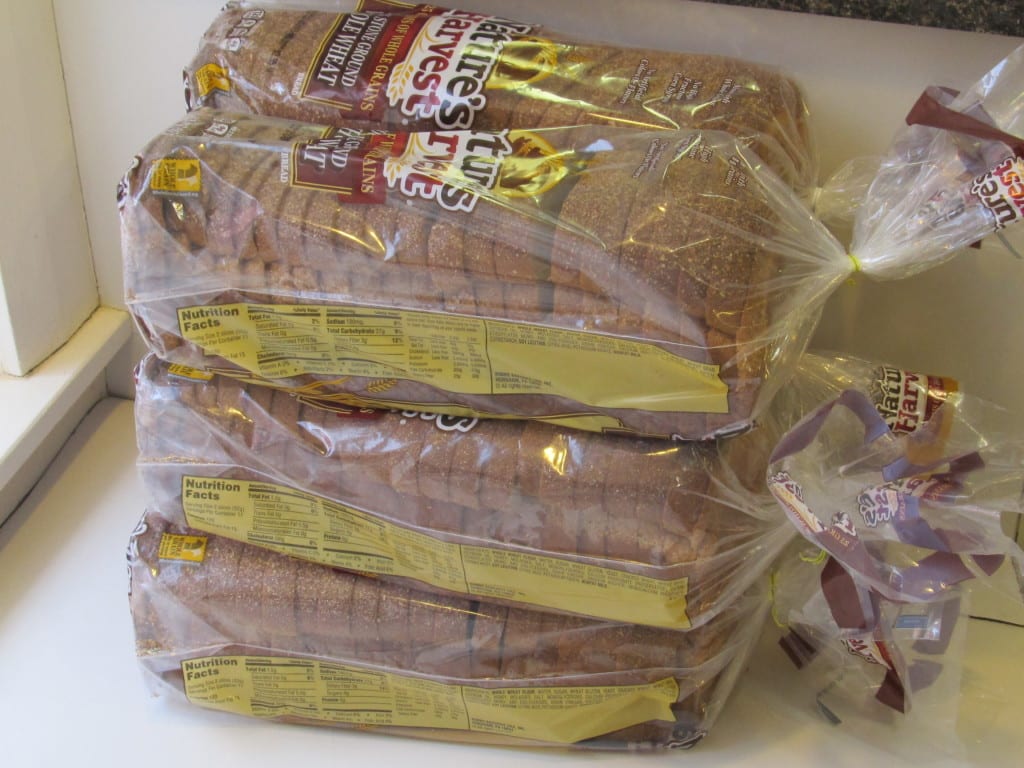 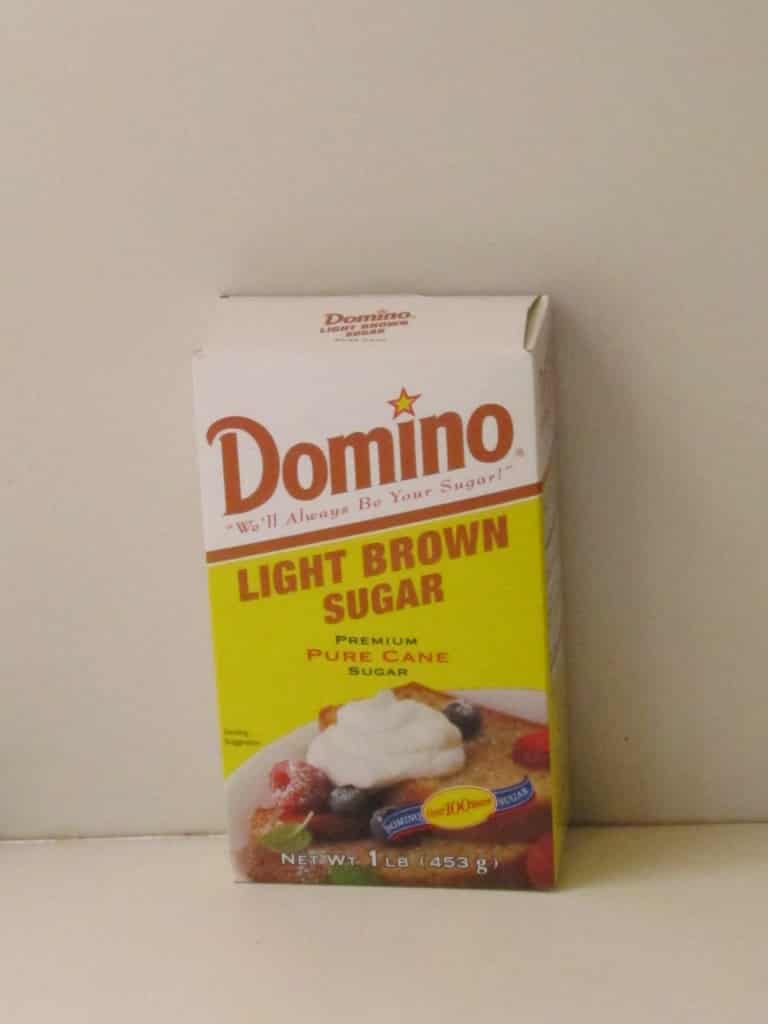 The Nature’s Harvest bread was just $0.25  a loaf after gas rewards.  I usually make my own bread, but when I can get decent bought bread for $0.25 a loaf, I will!  🙂  I have actually really been trying to figure out ways to simplify my routine and make myself less busy.  I love making bread and plan to keep doing it, but when I saw that I could again get this Nature’s Harvest bread cheaply, I knew that this was one way that I could make my life a little bit easier right now and free up some time.

The domino sugar was free after Saving Star’s Freebie Friday offer.  Of course, I can always use free sugar!

(If you aren’t familiar with how the gas deals work, basically you earn so much off a gallon of gas when you purchase a certain number of specific items.  This time I earned $7.50 worth of free gas for purchasing the Nature’s Harvest bread.) 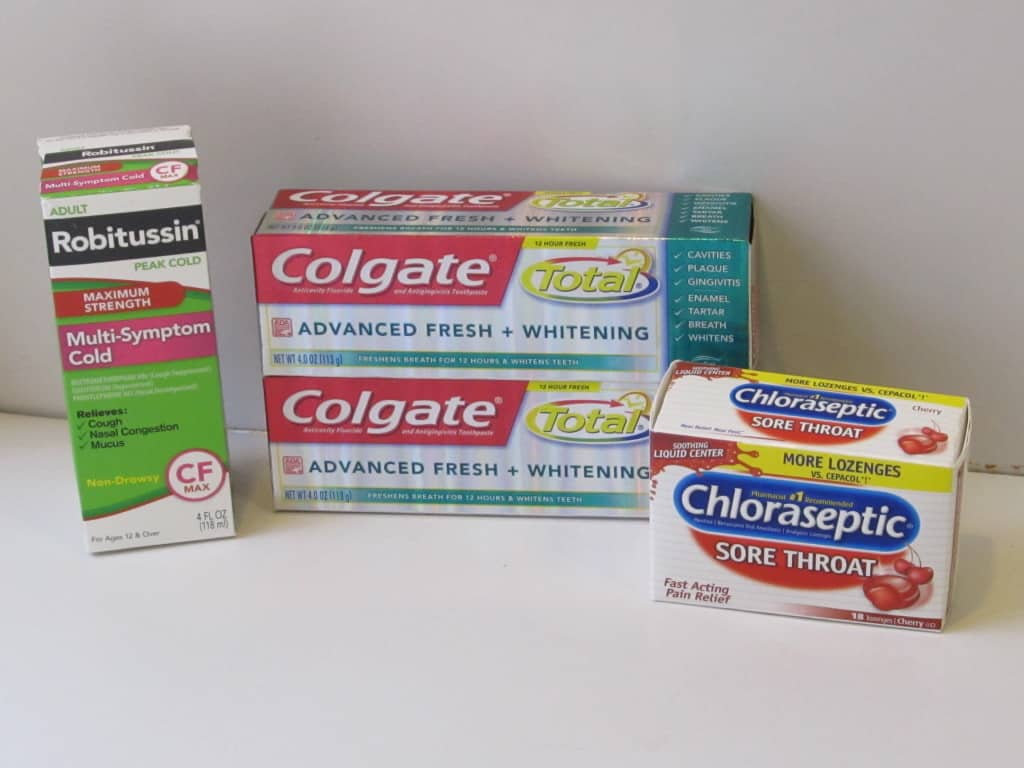 It was another decent week at Rite Aid.  In fact, they actually had more deals but were out of stock on them and I had to get a couple of rain checks

The Colgate was free after coupons/sales.  I only had about 4 tubes of toothpaste in my stockpile and while to most of you that probably sounds like a lot, to me, it felt like I was pretty much out!  See, I haven’t actually paid for toothpaste in years.  If I’m careful and watch, I can semi-frequently get deals like this where I get it totally free (sometimes even make money on it!) after coupons and sales.  The key to being able to do that though, partly lies in having extra on hand.  If I waited until I was totally out of toothpaste to get more, well, I’d most likely not be able to get it free.  Instead, I have to think ahead and get it for free when I see it, even if I don’t really need it right then.  And actually, I toothpaste is one of the things that I often give to my in-laws and parents too.  So if I do get a bunch, then I just share!

I bought the Chloraseptic to give to a neighbor friend of ours.  It was only $1 and I knew he used them, so I figured I’d get them for him.  That is one of the things that I love about couponing- being able to bless others with my cheap finds.

And the Robitussin was kind of a bomb.  🙁  I bought it because I thought I was getting it free after coupons and sales, but the cashier failed to ring my manufacturer coupon for it and then when I got home and went to submit the receipt for the Snap by Groupon Robitussin offer, it was sold out.  I don’t really need Robitussin, although it is nice to have on hand, so I’m going to be returning it this week when I go to Rite Aid. 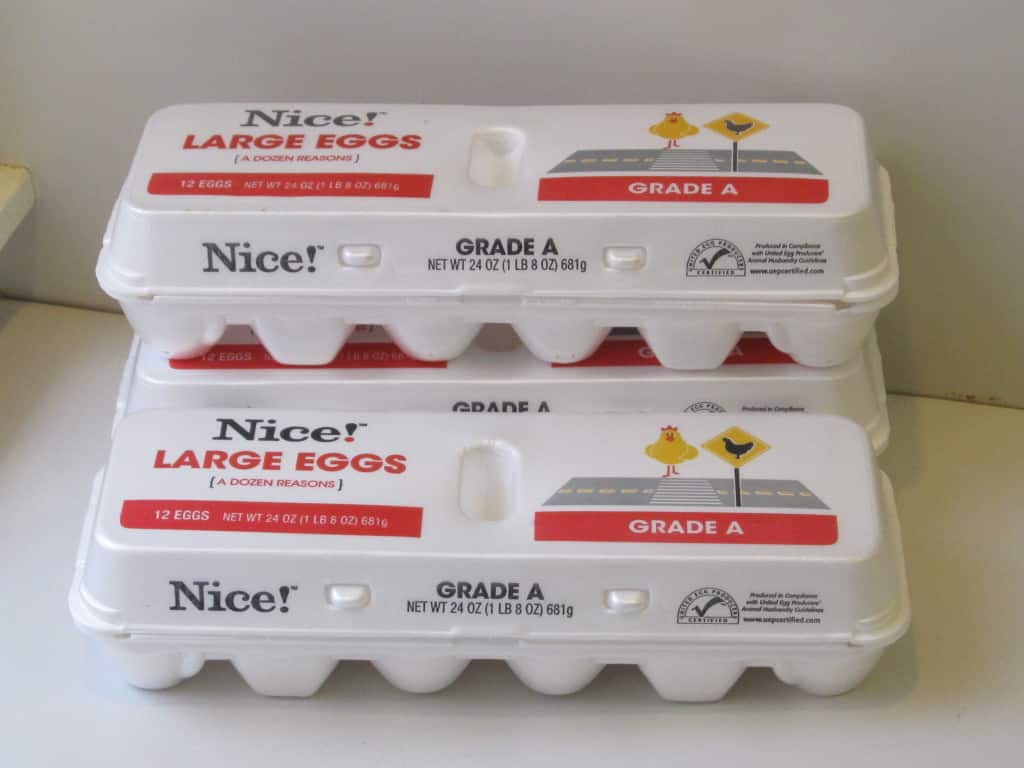 This was totally an unplanned purchase.  I drive by Walgreens on my way to Aldi and happened to notice their sign out front that said “Eggs $1.29”.  Well, I had just mentioned last week in my What I Spent & Saved post that eggs are so expensive anymore.  So, since I didn’t have any of the children with me and had plenty of time, I did a quick run into Walgreens and got 3 dozen eggs for $0.56/dozen less than what I can get them at Aldi.

Then later this week my dad-in-law called me to let me know of a somewhat local farm that he discovered sells farm fresh eggs for $1.65/dozen.  He had heard me mention to my mom-in-law that eggs are getting to be so expensive so he thought he’d just let me know in case it helped me out.  Wasn’t that so kind of him?

I also had a friend who saw my Facebook discussion and let me know of a local egg farm that sells eggs for just $0.88/dozen when you buy 15 dozen. That’s a lot of eggs, but obviously if you split the case, it could be doable.   So….maybe, just maybe I can regularly get cheaper eggs in the future!  🙂 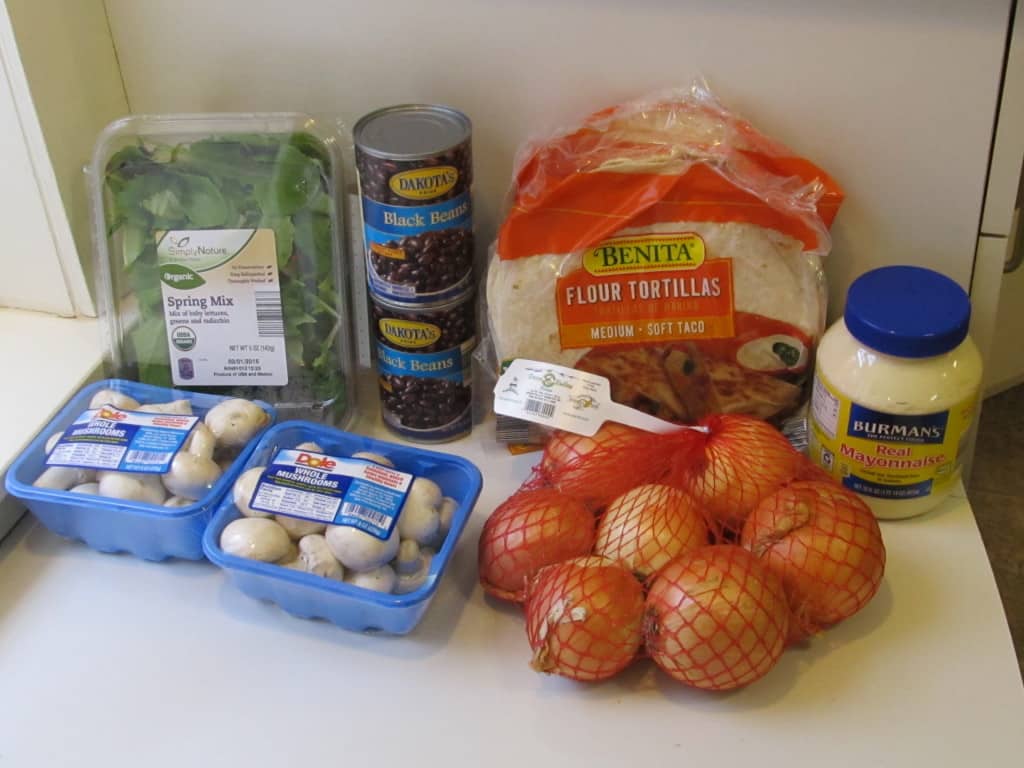 I had tried to buy enough when I was at Aldi last week so I wouldn’t have to go this week.  But I got desperate for some salad and ended up doing an Aldi stop after all!

See, I normally buy lettuce from our local farmer’s market.  But with the awful freezing, snowy weather that we’ve been having, I just haven’t made it there the last couple of weeks.  I had decided that I’d go on Tuesday and long story short, the guy at the stand where I usually get the lettuce forgot to hold some for me!  (He’s been nice enough to give me his cell phone number so that I can call him and have him save some back since they almost always sell out fairly early.)  We had limped along for 1 ½ weeks without salad but I was getting good and ready to enjoy it again!  So since I was driving past Aldi to go to Giant anyway, I decided to do a quick stop and get some greens.  I ended up getting their organic spring mix which I had never tried before.  It was only $0.50 more than their regular spring mix so I figured it was one of those times we could afford to go organic.  I was mostly impressed with it.  It had a lot of more grass-like kinds of lettuce than we prefer, but it wasn’t bad for something different.

The mushrooms were on special and they also had onions that were on sale too, but unfortunately were out of them.  I needed onions anyway, so I got the other kind that they had.  I was hoping that they’d offer to sub the onions I bought at the same price as the out of stock on sale ones like they sometimes do, but they didn’t and I felt kind of cheap asking them to.  The other items were all just things that I needed.

Credits: $63.95
The last couple of weeks I’ve been buying various items that are part of the Giant gas deals.  Basically, you get points for purchasing the products and then you can redeem those points for gas.  I was able to get $63.95 worth of gas for free as a result.  And since I only buy the grocery items that are part of these deals because they either get me free gas or make me money, I put the savings back into my grocery budget.  (To see the details of these purchases look at my previous Giant purchases under my What I Spent & What I Saved posts.)

It’s the last week of the month which means I let you see how I’m doing budget wise.

I was pretty happy to come in under budget by almost $70!  I always try to be under budget by a good bit the first several months of the year to gear up for the summer months when I typically go over budget due to buying lots of fruits and veggies to can and freeze.

While I look at our grocery budget every month and try to stay within it, we actually tend to look at our budget as more of an annual budget.  What I mean is, I know that I have $2,400 to spend on groceries for the year since we budget $200 a month.  So if I have to go over one month due to stocking up on a basic food like chicken or something, it’s okay.  I just know I need to be under budget another month.

Obviously if we were living paycheck to paycheck I wouldn’t be able to do this, and at one time, that was the case.  But we have a bit of wiggle room financially now and we’ve found that we actually save more and live on less if we look at our budget this way, as more of an annual thing.

So, here’s the stats for February!

Disclosure: This post contains affiliate links. Thank you for helping to keep the lights on here at the Thrifty Frugal Mom!